Daniel Ford is a media entrepreneur who specialises in launches and relaunches. He is a writer, editor and publisher and is currently publishing director of Chase My Snail, a book packaging company in London that produces books for major publishers such as Penguin. Prior to that he was CEO of the pan-African design magazine Ogojiii, a launch project operating in Johannesburg and Nairobi.

He was editor of GQ South Africa, based in Cape Town, for five years from its launch in 1999 and previously editor of Sunday Life magazine for Independent Newspapers, which he worked on from issue one. He worked with the South African Broadcasting Corporation to successfully translate the lifestyle TV show Top Billing into a glossy print format and has consulted to companies such as Laureus World Sports Awards, dunhill, Old Mutual and Engen on their media products across UK, USA, Italy, South Africa and India.

He has worked on television, radio and online but print remains his first love and in a brief foray into poetry he was named the UK’s Curry Bard in 2011, proving that no matter what you think your style of writing is, you shouldn’t be afraid to try something new. 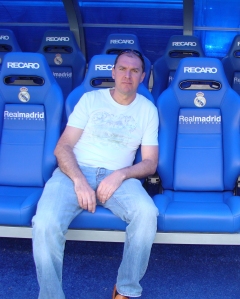 Some of his books are:

The Greatest Springbok Teams (Penguin Random House 2015) profiles the players and teams who smashed the All Blacks and Australia in their own backyards in 1937, the conquerors of Europe in 1951/52, those who faced the hungry British Lions in 1924, 1980 and 2009, the Boks who lifted the World Cup in 1995 and 2007, plus many other great sides.

Don’t Touch the Nuts: the Unwritten Rules of British Pubs (New Holland 2010) is a humorous look at the rituals and habits in the great British pub. Why do old boys always have to sit in the same seat? Are all country pubs really haunted? But most importantly, just what are urinal rules? Don’t Touch the Nuts is also available as an e-book.

A Fan’s Guide to World Cricket (New Holland 2010). A travel/sports guide for fans who want to watch cricket around the world, whether it’s the West Indies, Australia, South Africa, India or beyond.

Should I Stay or Should I Go? (Two Dogs, South Africa, 2010). Co-author of a collection of essays about the issue of emigration and immigration to and from South Africa. Is life always greener on the other side of the world?

A Football Fan’s Guide to Europe (New Holland 2009), a travel/sports guide for fans who want to follow their team in Europe. The book is available in the UK, Poland, Holland, Belgium, Sweden, Bulgaria, Russia, Ukraine, Kazakhstan, China, Indonesia, Brazil and South Africa.

He has contributed to numerous other current titles including Running: Serious About Your Sport (New Holland 2012), Triathlon: Serious About Your Sport (New Holland 2012), both published in numerous countries, Walking with Lions: the essential guide to touring with the 2013 British and Irish Lions (Polaris Publishing); and in South Africa, Why I’d Never Live in Oz Again (Two Dogs 2008), and the SA Whisky Handbook (SchreiberFord Publications 2007, 2008, 2009). He was co-author of Football Grounds Then and Now (Dial Press 1994).

Dont touch the nuts is a fantastic book…….everyone should read this

Daniel Ford is a passionated writer who research through simples details of life, listening others people experience and he put all together to offer all his books collection which people enjoy with laughts and finding theirselves at some point on the story or maybe in the whole story. Congratulation Daniel for your excellent radar writing for different public but with the same in comun: passion