A four-part series about pubs that publicised Don’t Touch the Nuts.

This entry was posted in Books*, Reviews and publicity and tagged Daniel Ford, Greenwich Visitor, Pubs.

Win a copy of A Fan’s Guide of World Cricket, thanks to this competition that appeared in The People in September. 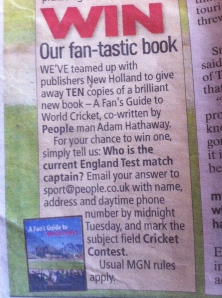 This entry was posted in Books*, Reviews and publicity and tagged A Fan's Guide to World Rugby, Daniel Ford, The People newspaper, Writing.

Football fans could be taking in Las Ramblas alongside the Camp Nou thanks to a new travel guide from New Holland.

A Football Fan’s Guide to Europe, by Daniel Ford and Bill Edgar, offers football fans a selection of European tourist sights to visit alongside facts and trivia about the continent’s top teams.

In the Barcelona listing, it has a short history of the current Champions League winners and two short biographies of two of their greatest players, Johann Cryuff and Ronaldinho. It also provides fans with a guide to the city, highlighting bars and the essential tourist spots, such as the Museu Picasso and Las Ramblas.

Steve Connolly, managing director of New Holland, said the book was a response to the recent successes of English teams in European competitions. He said: “European competitions have become so popular in the UK and across Europe. So football fans are travelling around more than they maybe used to, visiting places they haven’t been before and know little about.”

The book features more than 60 teams but alongside heavyweights such as AC Milan, Liverpool and Bayern Munich are lesser known European teams such as Debrecen in Hungary and Wisla Krakow in Poland. Connolly said: “There are so many more teams playing regularly in Europe than you would expect. We haven’t intended this as a thorough travel guide. It’s more a fun guide offering travel tips.”

This entry was posted in Books*, Reviews and publicity and tagged A Football Fan's Guide to Europe, Daniel Ford, Football, The Bookseller, Writing.